Nada Bramande Tatte Pinde – all vibrations live within us, as us

Hayley’s personal path has seen her living in a state of both immense pain & fear,  and through discovering the healing practice of Samvahan Vidya,  the paradoxical state of immense love & ease. Early life experiences gifted her the opportunity to explore how music, meditation & massage can bring wonderful support and powerful medicine to our innate healing process. Hayley is honoured to offer space for others to experience this for themselves.

With great compassion and sensitivity, Hayley encourages you to listen into your body’s own wisdom. Using Samvahan vibrations, the resonance of the harp, bowls, voice and tuning forks, she supports you in letting go of that which stands in the way of your own healing.

Hayley is a certified Samvahan vidya practitioner. She offers Samvahan Vibrational Massage, an ancient Himalayan healing technique, and combines this with her work as a professional Harpist, bringing the therapeutic vibrations of the harp into private Samvahan sessions. 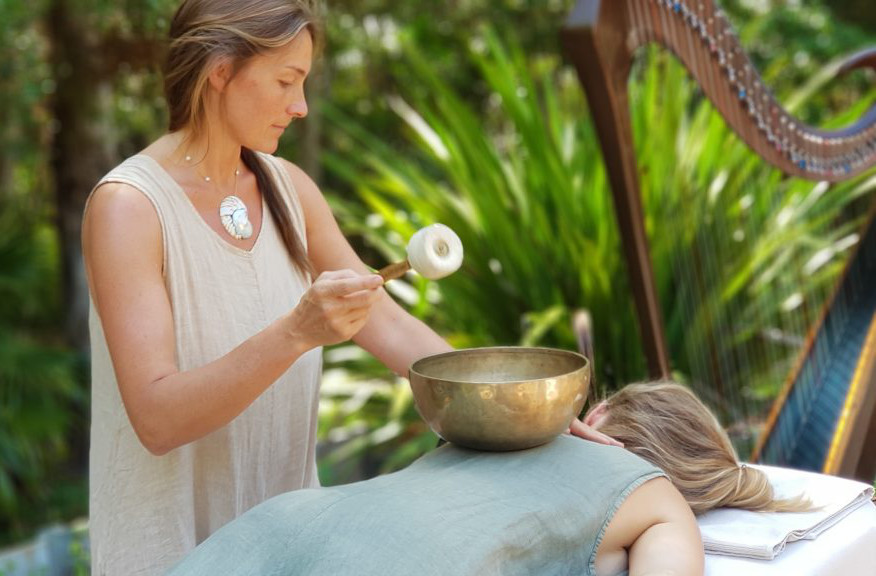 Samvahan is Sanskrit, translating as “the vehicle which brings balance” or “even dead tissue can be re-awakend” and views the body and our environment as vibration interacting with vibration. The gentle, musical,light massage-like technique using the hands, Samvahan vibrations, & spiritually inspired sounds of the harp, bowls, tuning forks and the voice to amplify and balance the body’s natural healing rhythms.

..Hayley’s clients often come to her experiencing physical, emotional or mental pain and are looking for a way to find more ease & freedom in their body and their life. She enjoys being able to offer a safe and profoundly grounded, harmonising and soothing space in which a person may choose to heal themselves, cultivate a loving awareness of their own grounding and healing forces, move and release frequencies that are keeping you from welcoming joy & freedom into your body and your life and experience your natural state of balance & clarity 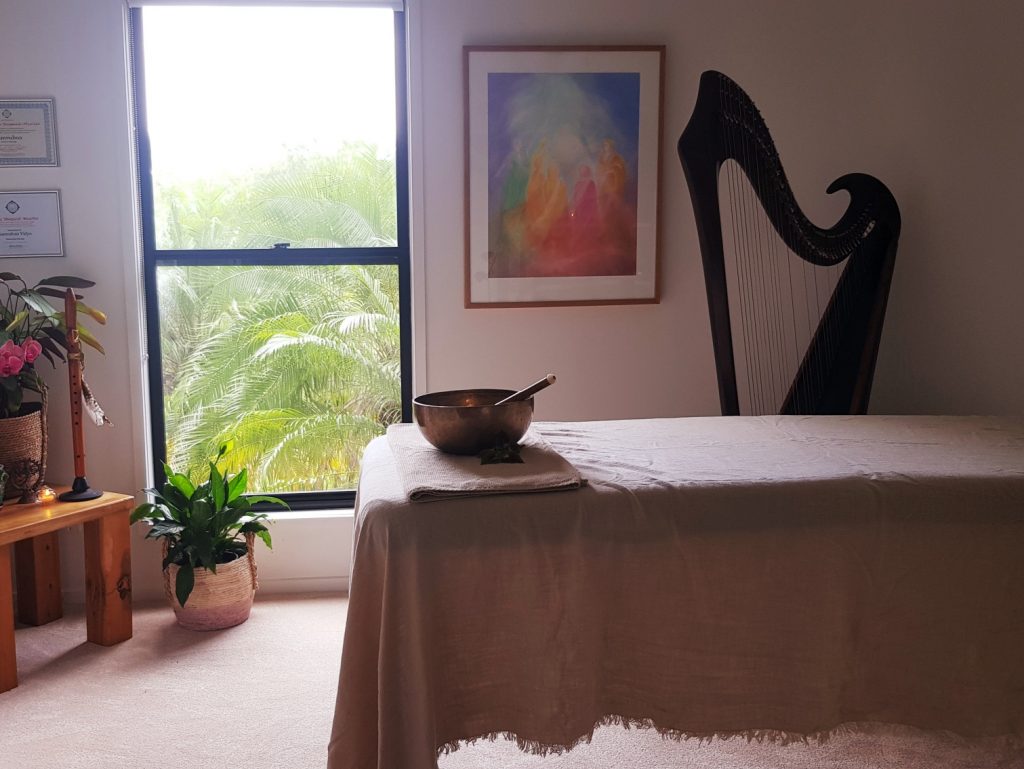 Hayley was fortunate to begin her Samvahan training in 2005 with Michael Trembath, who left his earthly body in March 2021. Michael was the living steward of Samvahan and a master healer and international teacher, compassionate being and devoted father.
Samvahan was mastered and revived in the 1930’s by Michael’s teacher Dr. Ram K. Bhosle in India (1918-2005), as passed down from the Indian Saint Mahavatar Babaji. Dr Bosle was a renowned healer and personal physician to Ghandi and PM Nehru, amongst many others of his time.
When Hayley was first introduced to Samvahan in 2004 during a treatment from Michael Trembath, Hayley experienced the musicality and playfulness of Samvahan massage as her own body  being “tuned up”, as though it was a universal musical instrument being played soothingly into balance and freedom. This felt like the most natural alignment of all of Hayley’s passions of music, meditation and healing.
Hayley feels honoured to have received teachings of the Samvahan linage and to be able to share the blessings and grace of Samvahan through her work.
She offers Samvahan treatments and private or small group meditation sessions in her garden studio.
Hayley invites you to experience the grounding, divine vibrations of Samvahan and the exquisite sounds of the harp, to allow grace and ease to flow into your life.

What others have to say about Samvahan:

Hello Hayley, the sweetness which resides in me after our session together is such a delight & perhaps a more defined picture of what grace feels like in its true essence. The space you hold & share is unique & so deeply nourishing on all levels of the being. You have a wonderful gift to share with the world as what you offer is the nourishment we all need right now to feel whole, connected & in our heart space. Endless gratitude & I look forward to coming again for deeper connection & release & spaciousness. Thank You. All my blessings.

Hayley creates the most beautiful calm healing space-her gift of combining Samvahan and playing the harp is truly magical….it has been many days since our session and if I stop and just be and think of the harp I can still feel the melody through my body! So powerful!And I’m happy to share that for over a year I have struggled with lower back/hip issues and in our session I could feel my right hip release as Hayley just sat with this hip for some time. Since then I haven’t been woken in the night with pain or woken in the morning with hip pain for the first time in over a year- so very grateful for this healing.

for this amazing healing! I cannot even compare this to any other healing I have had before. I had a lot of sensation on so many levels….my leg and  my skull were vibrating and releasing all that had to leave my body. Felt a very intense sensation coming from the harp as well as the Tibetan bowl…

Hayley offers small group or private meditations from her practice. These sessions bring the Samvahan principles of grounding, presence and focus to move vibrations and amplify vibrations in your body. Learning techniques to cultivate and maintain a state of Calm, greater clarity, stability and balance in your being and a true sense of nourishment in your life. 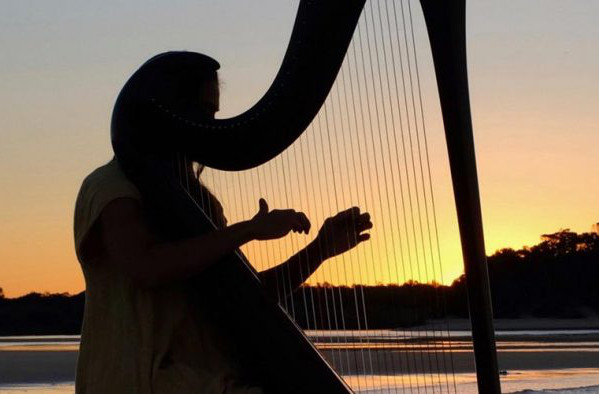 These meditations are accompanied by deeply relaxing sounds of the harp. Hayley offers group Harp relaxation sessions at private retreats and will gladly collaborate with you to tailor the session to meet your guests experience.
Harp meditation and relaxation session at Yoga by the Bay’s autumn retreat in Sunshine Coast hinterland, a weekend of letting go and reconnection, hosted by Kirsten & Chloe. 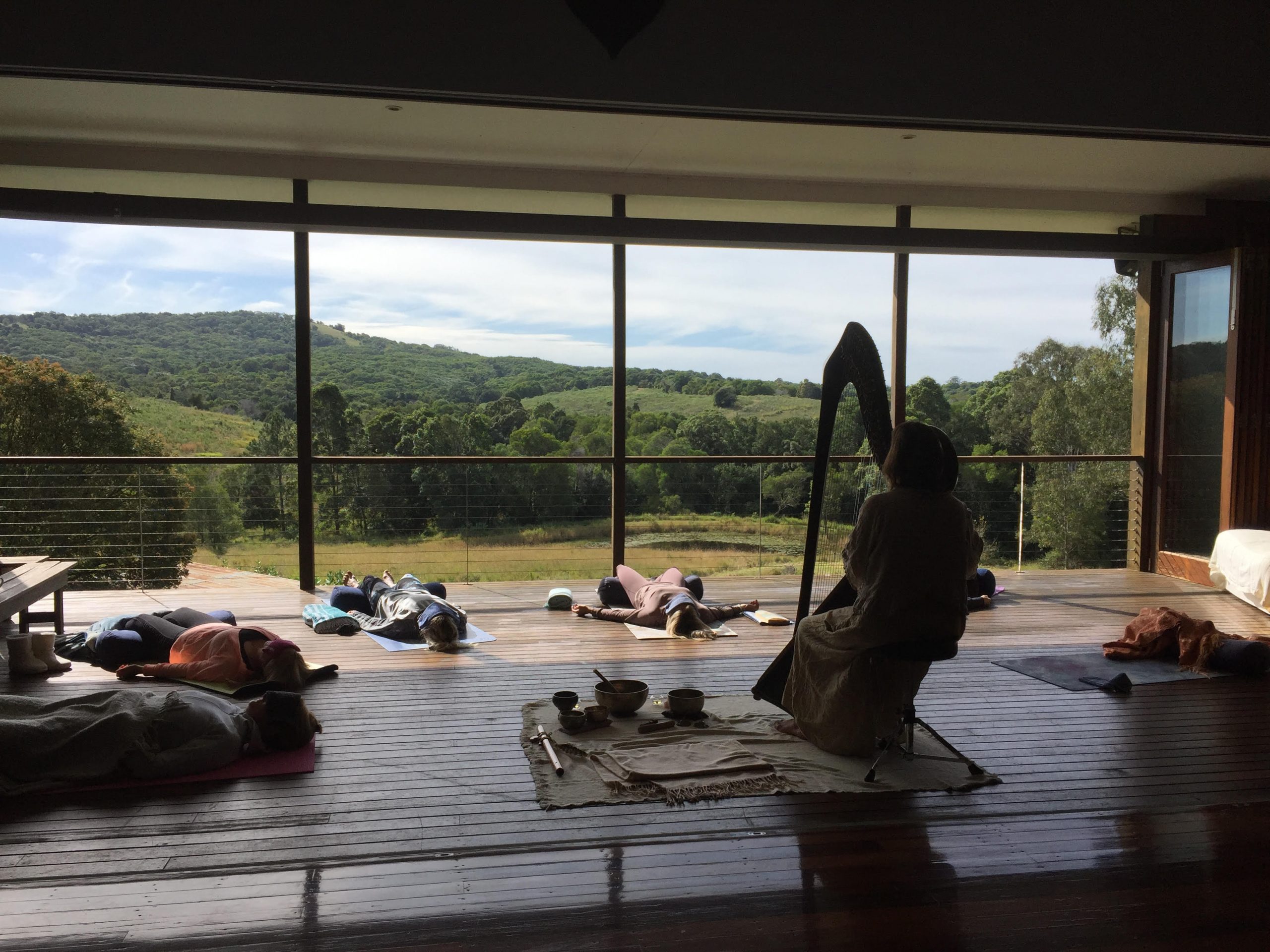